THE over-50s are setting up their own businesses at a faster rate than any other age group and are now employing 10 million people.

A new generation of “oldpreneurs” is proving to be a driving force in the UK economy, with those aged 50-plus setting up and running their own business faster than any other age groups.

Instead of winding down to retirement, they are outstripping younger counterparts on several fronts – from spending to job creation and contribution to GDP – which is having a significant impact on Britain’s economic prosperity.

Older business owners are employing 10 million workers, while one in seven (14 per cent) over-60s runs their own business, either full or part time, and a further nine per cent are self-employed, freelancing across a variety of industries.

The reasons behind over-60s staying in work are numerous, as researchers commissioned by the luxury retirement developer Audley Villages discovered.

A desire for the extra money ranks highly on the list of course. But there are additional benefits.

Of the over-60s who are in work, two in five (38 per cent) believe it supports their physical and mental wellbeing, 38 per cent simply enjoy the work they do, just over a quarter (26 per cent) like the routine and one in seven (15 per cent) appreciates the social aspect of working alongside other people.

Nick Sanderson, chief executive of Audley Group, says: “For too long, entrepreneurship has been viewed as the preserve of the young. However, this is simply not the case and it’s insulting to overlook the economic contribution of older business owners.

“This generation play a vital part in the labour market, be that running their own businesses, setting up a new venture or offering their skills through freelancing. What’s more, the wealth of knowledge and years of experience arguably make for a far stronger contribution to the wider business community, and therefore a welcome boost to the economy.”

Labour Force Survey data shows that over-50s currently make up 45 per cent of the UK self-employed workforce, and that the employers among them accounted for nearly 10 million jobs in 2016 – almost two million more than the under-50s.

“Research challenges negative preconceptions about the over-50s – both in our industry and in society,” says Robert Gordon, chief executive of Hitachi Capital UK.

“Not only have we shown that this group is now the dominant force in the UK economy but also that their contribution across jobs, spending and wealth creation is growing at a considerably faster rate than the under-50s.

“It is time to stop being negative about the older generation. Instead of writing them off, we must become more effective at realising the economic ambitions of this growing section of the population.”

David Marr, 63, whose latest invention the “Uni-Prop” is an essential for the construction industry

David Marr
David, 63, has no intention of scaling back his entrepreneurial ambitions just because he is over 60. Marr, who is married and based in Ipswich, Suffolk, has a track record of successful innovation.

Back in 1990 he and his then business partner developed Le Verre de Vin, the world’s first wine preservation system, for re-sealing wine so it stays drinkable – used in bars and restaurants across the globe.

And he has similarly high expectations of his latest invention – the “Uni-Prop” a global first in hydraulic-assisted temporary supports for the construction industry. He and his team of three have just scored their first major success with builders’ merchants Jewson adding Uni-Prop to its hire fleet.

“With age comes experience and when it comes to business and entrepreneurial start-ups, experience counts,” he says.

“I’m in my sixties, but why should that make a difference? The drive is there, as is the energy to get out there – and the desire to make an idea work is timeless.” 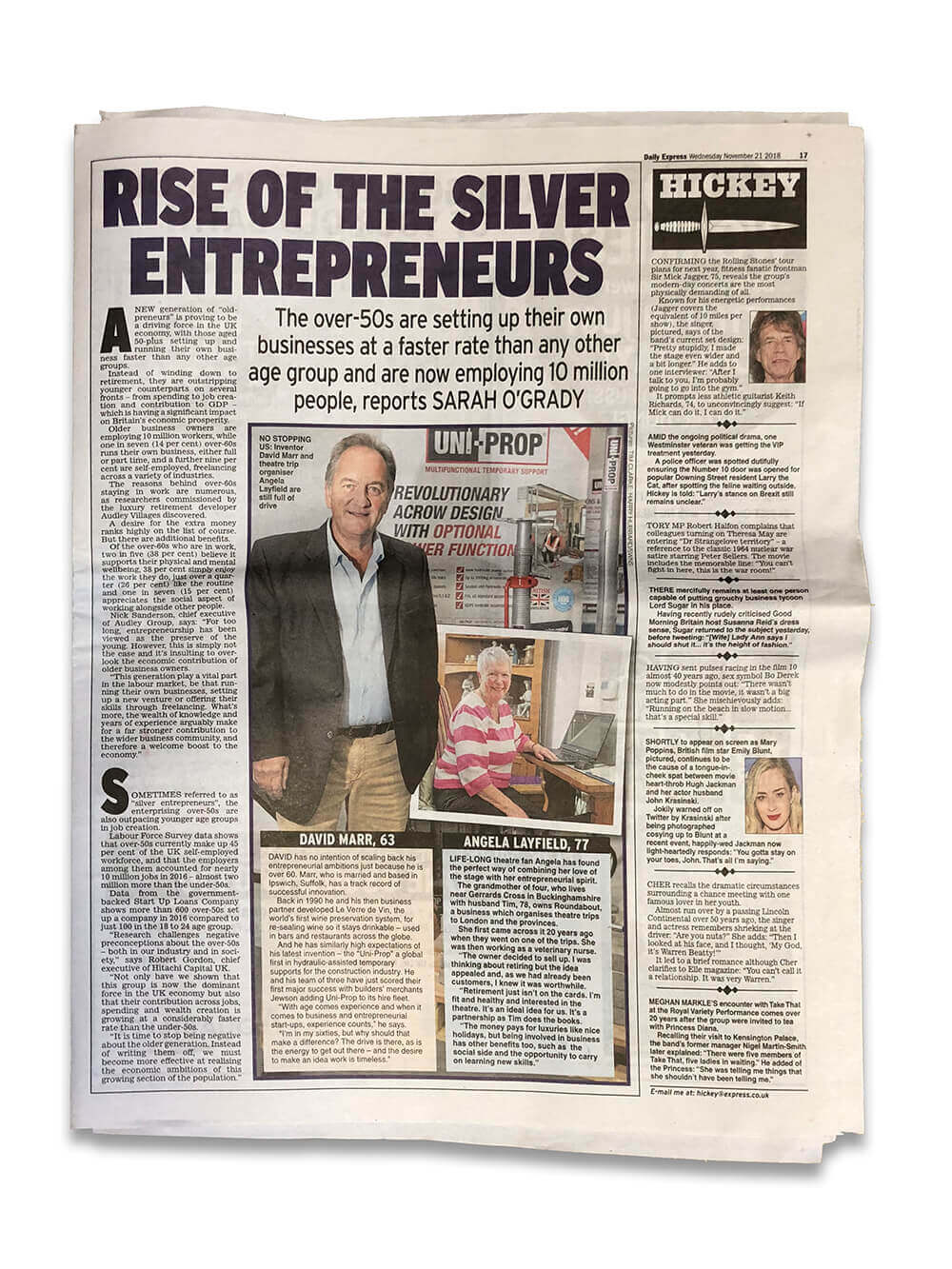